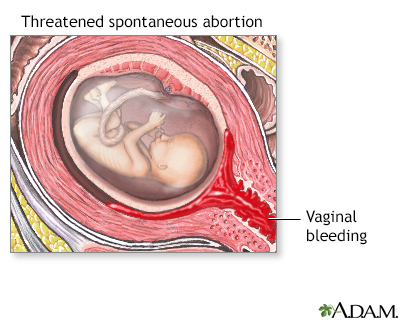 Miscarriage is the spontaneous loss of pregnancy during the first 20 weeks of gestation. It is also called "spontaneous abortion," or early pregnancy loss.

Miscarriage is very common. As many as 30% of women will experience one, usually before they even miss a period, or realize they are pregnant. Most early miscarriages are a result of a developing fetus that is unhealthy and has no chance of surviving to the end of pregnancy.

Some known causes of miscarriage include:

Women often blame themselves for having a miscarriage. It is important to remember that, in the vast majority of cases, there was something fundamentally wrong with the way the fetus formed, and nothing the mother did could have changed that. And keep in mind that having one miscarriage does not necessarily mean having another. The chances are very high that you'll carry your next baby to full term.

How Do I Know If I'm Having A Miscarriage?

If you are pregnant and have any of these symptoms, call your health care provider immediately:

Your health care provider will listen for a fetal heartbeat and perform a pelvic exam. If a heartbeat is not heard or your cervix is dilated, or widened, or if your membranes have ruptured, then most likely a miscarriage is in progress, or has already happened. This may be termed an "inevitable miscarriage." If a fetal heartbeat is detected and your cervix is still closed, you may have suffered a "threatened miscarriage." In this case, you will have vaginal bleeding but the fetus is still alive. In a threatened miscarriage, bleeding may resolve, and the pregnancy can go on to a normal full-term delivery. However, any time there is bleeding in pregnancy, be sure to check with your doctor to see if you need to take medicine called Rhogam. Depending on your blood type, an injection of this medicine may be necessary to prevent you from developing antibodies against blood cells in future pregnancies.

An ultrasound and physical exam can be helpful in sorting out what’s happening. An ultrasound test emits high-frequency sound waves that penetrate the uterus to reveal an image of the fetus on a monitor. If no image of the fetus is seen or if you can see fetal tissue traveling through the dilated cervix, then you may have had a miscarriage, or are in the process of one. If the fetus looks intact and your uterus is still enlarged, then you may have suffered a threatened miscarriage. Some women do not have any symptoms after the miscarriage. This is known as a missed abortion. When this happens, the miscarriage may go undetected for several weeks, until the next prenatal visit. If a fetal heartbeat is not heard after eight to 10 weeks gestation and there is no sign of uterine growth, then a miscarriage probably took place.

Many miscarriages happen before a woman knows she's pregnant. Miscarriages can be mistaken for periods that are unusually heavy and severe. Bleeding early in pregnancy before an intrauterine pregnancy has been confirmed may be a sign of an ectopic pregnancy. If you have any concerns about your last period, talk to your health care provider.

How Is It Treated?

Options for treatment include:

Bleeding may continue for several weeks after a miscarriage and change in color from bright red to pink or brown. You may also experience abdominal cramping.

If the bleeding gets heavier after a few weeks instead of decreasing, contact your health care provider. If a fever develops, or if vaginal discharge has a strange or unpleasant odor, inform your doctor. Avoid intercourse, douching, or using tampons for at least two weeks and then gradually resume normal activities, such as exercise.

How Can I Prevent It?

It most cases, nothing can be done to prevent a miscarriage. If you know you are pregnant, make sure you get proper prenatal care and talk to your health care provider about diet prenatal vitamins. Most of the time, however, miscarriages happen because the embryo didn’t form correctly. The miscarriage is actually your body’s way of naturally passing the pregnancy to give you a chance for a future, healthy, pregnancy

After a threatened miscarriage, take it easy for a few days, and avoid intercourse for a few weeks. Most likely you will carry your baby to term. Remember, it's very normal for women to bleed in early pregnancy, and it's certainly not always an indication that the fetus is unhealthy or that you are having a miscarriage. In fact, some women bleed throughout their pregnancy. It should be brought to your health care provider's attention as bleeding can be associated with other medical problems such as uterine fibroids, abnormal placental implantation, chronic abruptio (relatively rare). Talk to your health care provider about any concerns you have.

Q: I've already had one miscarriage. Does this mean I'm more likely to have another one?

A: Having one miscarriage does not increase your chances of having another. If you have had only one prior miscarriage, the rate of spontaneous abortion in a subsequent pregnancy is similar to the overall rate in the general population.

Q: After my miscarriage, how long should I wait before I try to conceive again?

A: It is usually suggested that you wait two normal periods (around eight weeks) before you try to conceive again. That’s largely to let you recover emotionally from losing a pregnancy. If you do conceive before you’ve had two normal periods, you’re not at higher risk of having problems with your next pregnancy. If you do want to wait for a few cycles, be aware that ovulation can resume as early as two weeks after a miscarriage, so you should use effective contraception immediately.

Q: Can being too active cause a miscarriage?

A: No. Working, exercise, and sexual activity do not increase the risk of miscarriage.

Q: I have had two miscarriages. Should I have special testing?

A: Since most miscarriages are caused by a defect of the particular fertilized egg, most experts do not recommend special testing until you have had three miscarriages. At that point it is termed "recurrent" or "habitual" miscarriage and further testing may be needed. Studies have shown that after a woman experienced three consecutive miscarriages, her chance of having subsequent spontaneous abortion is nearly 50%.

All rights reserved.
A.D.A.M. content is best viewed in IE9 or above, Firefox and Google Chrome browser.